Oh hey, remember my strapless bra project? This week I had a little “me sewing time” after over a month away, and finally worked on finishing it up!

Have you ever used boning in a strapless dress or bra? It’s is one of those little extra things that can add shape and staying up power. A couple of readers have asked me if boning is absolutely necessary and I guess my answer would be—it depends on how serious you are about your bra staying up!

Without bones, a bra slips a bit into “bandeau territory”… the battle of constant pulling up throughout the day. A longer line band helps, as does gripper elastic, but boning is the key to keeping those sides up.

So let’s add some bones… Here’s what you need:

You’ll notice my bra is almost finished. I still have to add the hook & eyes but I wanted to add the boning at the very end so that the bones extended over the elastic and covered most of the side seam.

1. Lay your boning on your the side seams and mark off the length you want. Make sure to leave some room above and below the boning to close the channeling. Then cut. 2. Round off the ends of the boning with a nail file. This prevents sharp corners from poking through. You can also use your scissors to created rounded ends on the plastic—easy!

3. Now it’s time to add your channeling. Line up the channeling so that it is centered over your side seam and stitch down each side, leaving the ends open. You’ll notice I left a part of the ends unstitched. I did that so I’d have some room to fold under the channeling before closing it off. My homemade channeling is thin enough to do that but most channeling isn’t, so go ahead and stitch all the way down!

4. Insert your bones and test the length. Do you have enough room to close off the channeling with your machinef foot? If not file or cut a bit more off the ends. 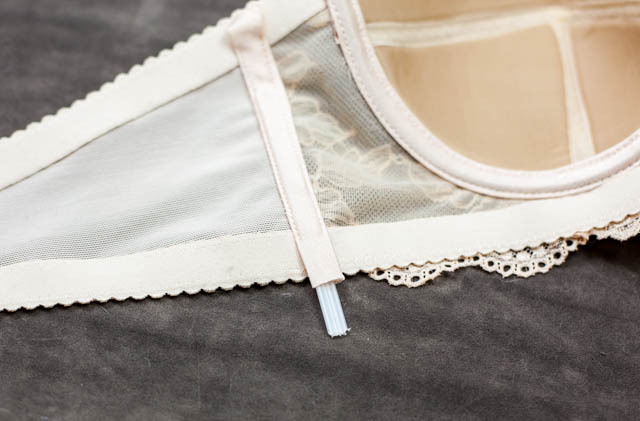 5. Close off the ends. I stitch forward and backward with a small-length straight stitch (between 1 and 1.5). Here’s a close-up… On a side note, I used to try a narrow zig-zag or bartack stitch to close off wire channeling but it is really difficult to do neatly over that many layers with my machine. The straight stitch works just fine.

And from the outside… That’s it! I promise I’ll be back with some details on the finished bra. I had to make a pair of undies to go with it, of course!